From Hampshire to Hollywood! 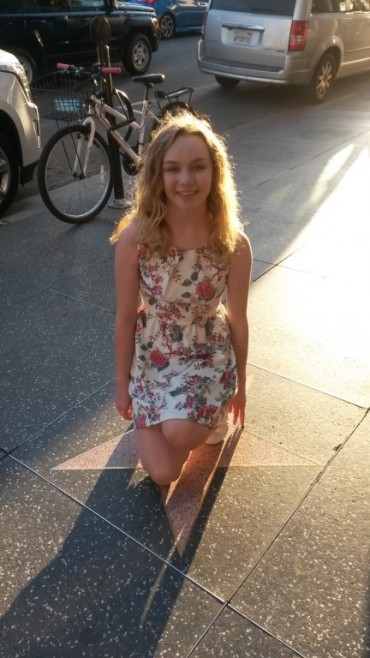 A Hampshire starlet has hit the bright lights of Hollywood – aged just 13.

Thornden pupil Ciara Parker from Chandlers Ford was head hunted by talent spotters to spend 2 weeks in LA earlier this year. Bosses at Disney were amongst those who met with the child protégé. It is the latest result of almost 10 years training and working in the performing arts industry. Only last year, Ciara was awarded a bursary of £9000 from the Mayflower theatre towards her ongoing development in the arts.

Ciara has performed on many stages on the south coast and London and has just recently finished ‘Mayflower Music Hall’. As well as her current theatre projects, Ciara is also filming ‘Case Files’ in Nottingham, preparing for the Alresford festival and has been cast for a short film as well as for a pilot being filmed in July.

Ciara is now being touted for the big time after a breakthrough year!

Ciara, represented by RBAPA London, jetted off to Hollywood to perform for leading LA agents. During her stateside spell, she worked with high profile acting coaches Deborah Lemmen and Wendy Farone – the onset acting coach for Disney and director of the hit show ‘Liv and Maddie’. Wendy was so taken with Ciara’s talent that she now trains her on a regular basis.

Becky Newton (Amanda in the TV show ‘Ugly Betty’) spent time mentoring Ciara on how to approach auditions and castings.

Ciara also performed at the ‘Complex Theatre’ in the heart of Hollywood as well as wowed VIPs on the catwalk.

Of her experience, Ciara says:

“Hollywood is my dream coming true.  I loved auditioning and performing for the agents and directors, especially for my ‘Disney General’ audition and can’t believe how lucky I am. Shooting my showreel was just a taste of things to come. To have the chance to work with high profile Hollywood actors, directors and casting agents is amazing.

“Performing is my passion and I want to live it, dream it, do it!”

” Ciara is a very talented triple threat performer who works consistently hard to perfect her acting, singing and dancing skills. Having scored highly across the board at the CYT UK showcase we chose to take her to LA where she wowed the VIPs.  Ciara is an absolute pleasure to work with and we know she will go far.”

And if that wasn’t enough, Ciara is celebrating success with the publication of her poem  ‘Seasons’ in the anthology  ‘The Poetry Trials’ following a national competition organised by Young Writers.