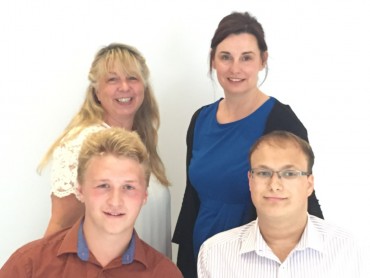 Sam Gibson, 22, from Goole, and Ryan Postill, 17, from Hornsea, will be pursuing their work-based studies in Business Administration.

360 already runs an extremely successful apprenticeship programme training the next generation of accountants. All six, so far, have been promoted internally. However, with the growth of the company, it was decided that training business administration specialists was the next priority. The two new recruits will be working alongside Practice Manager Cheryl Gledhill and Administration Co-ordinator Leanne Steele.

Andy Steele, founder and Director of the Hull and East Yorkshire-based firm, said:

“We are extremely proud of the 360 Apprentice Programme and delighted to welcome Sam and Ryan to the team. We are getting busier and busier all the time, so it is vital to ensure that our back office support keeps up with our ever increasing number of clients.“

360 first met Sam during the local Devil’s Kitchen competition, organised by the Smile foundation and the Springboard programme, which helps those not in employment, education or training (NEETs) find work. After an excellent one month work placement, he was offered a place on the 360 apprenticeship scheme.

Meanwhile Ryan completed his GCSEs at Hornsea School and Language College last summer and has decided to pursue his career with on-the-job training.