360 Chartered Accountants team up with HERIB for charity Challenge 500. 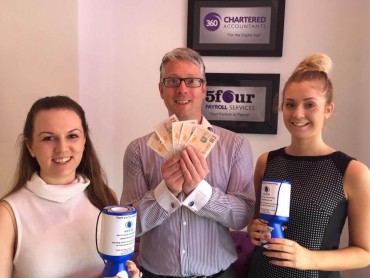 Chartered Accountants, 360, have revealed they are teaming up with Hull and East Riding Institute for the Blind (HERIB) to help raise money towards the charity’s latest campaign ‘Challenge 500’.

In an attempt to turn £50 into £500 for HERIB, five of the team from the Hull-based accountants will be auctioning off their professional services to the highest bidder.

Nominations are now open for a month after which it will be revealed what ‘Team 360’ have been tasked with in return for some crucial fundraising! It could be anything from a bit of credit control to painting your office – or something even more unusual! You decide.

“We’ll basically do anything that is safe and legal. If it needs doing and you’d like to employ the services of one of our seasoned team, dig deep and help us fundraise for this fantastic local charity that does so much good for so many”.

The team members that are taking part are Andy Steele himself, Jayne, Melissa, Sean and Sophie and bids are being accepted now by emailing events@360accountants.co.uk.

Entrants are being asked to include details of the task, when and where you would like it performing, who by and the amount of your bid. 360 will be letting those lucky winners know by 31st August.