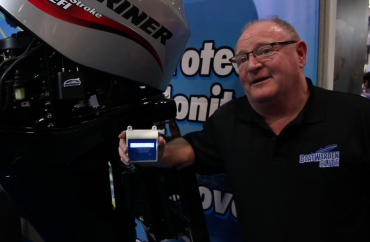 Outboard Warden, which is patent pending, sees simplicity and synchronicity come together to produce a device that is pretty much fail safe – and hugely desirable in 2016 with a dramatic rise in the number of boat thefts in the UK and across the world.

The clever on-board system has two units that must remain within a given proximity of each other, linked by an electronic chain, so that the instant they are parted and the chain is broken, an alert is triggered and the alarm raised over the mobile networks.

Unlike a traditional padlock, the owner will be alerted by mobile messaging that the theft is actually taking place and so can raise the alarm instantly.

Not only a world first in technology, it is also a first in terms of a deterrent and effective tracker of thieves.

For years the police, marine insurers and boat owners have been wrangling over claims. In these instances, the distraught boat owner is left with nothing, only the hope that the police authorities and insurance companies find a way of gathering evidence quickly and productively.

With Outboard Warden, confirmation of a theft is instant and so speed plays a major part in rooting the thieves out.

With engine thefts on the increase and thieves getting bolder, Outboard Warden is now being seen as an essential purchase in a world where computer technology and client protection are king.

“The new system can protect and track engines and any valuable equipment, like jet-skis, tenders, ribs and scuba gear.”

“By discouraging criminals, we aim to help boat owners reduce their premiums, cut out the hassle and get back their peace of mind.”

Outboard Warden is really very clever, but at the same time very simple. They have managed to produce a system that gives total protection to engines, jet-skis, ribs, tenders, and other expensive items – all from the palm of your hand.