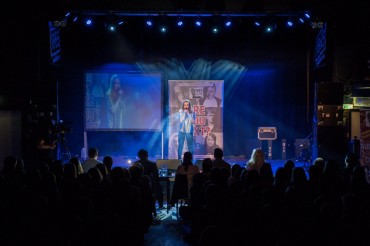 Teenage singer/actress Ciara Parker from Chandlers Ford is on her way to the Grand Finals of the annual Open Mic UK this weekend – the biggest search for unsigned talent in the UK.

The 14-year-old wowed judges at previous stages of the competition, which has seen more than 10,000 people enter, from singers and singer/songwriters to rappers and vocal groups.

With past winners including Brit Award nominee Birdy, Open Mic is a fantastic opportunity for artists to show off their talent to music industry professionals.

“I can’t wait to get on that stage at the N.E.C. on Saturday.  I have been working really hard on my song.  I‘m going to be singing a Sia song: ‘Freeze You Out’ and am so excited.

“Just getting to the finals and being able to sing in front of major names in the music industry is brilliant.  Winning would be incredible!”

As well as the judges voting, the winner also relies on audience votes on the day as well as a public vote which is now open.  To vote for Ciara text OPEN06 to 84222.  Votes cost £1.  You can vote as many times as you wish.

The Grand Finals of Open Mic UK is being held on Saturday 28th January 2017 at Birmingham’s N.E.C.

The winner will be crowned in front of a capacity crowd, including industry insiders, celebrity guests, national press, A&R from record labels and industry and media representatives.