360 Accountants team up with Hull KR for Rochdale clash 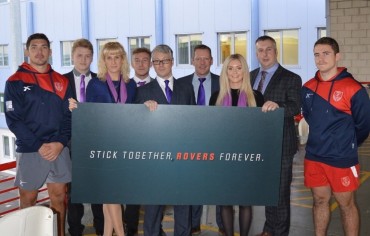 Long-standing sponsor 360 Accountants will be at this weekend’s clash between Hull KR and Rochdale Hornets at KCOM Craven Park and the local firm is playing its part in the local community ahead of kick-off.

Having sponsored the prestigious Vice Presidents’ Suite for several years, 360 Accountants will also be the main match sponsor for the first time this weekend and they’ve been working with future generations of rugby league fans over the past few weeks.

Teaming up with the Hull KR Community Trust, the Hull-based company, which has three offices across the region including one here at the stadium, has distributed 360 tickets for this weekend’s Kingstone Press Championship fixture to local schoolchildren and their families.

And to show that their community engagement is spread far and wide, 360 Accountants will also be fundraising in the 1882 Suite on matchday to help Hessle Sporting, a local amateur football club with 30 teams spread across the ages.

After the club was let down by a local builder which left their new clubhouse unfinished, the firm stepped in to help raise the remaining funds via collections and their Just Giving page.

360 Accountants, whose head offices in the city centre feature on the new Hull Monopoly board, have even pledged to donate a copy of the board game for each table in the club’s restaurant on Sunday as a token of their appreciation.

Hull KR CEO Mike Smith said: “360 Accountants have worked with the club for a number of years and were one of the first of our sponsors to get behind us after the Million Pound Game last season. They’ve even increased their involvement with the club in 2017, which has been vital for us behind the scenes.

“It’s great to see them remain so heavily involved with not only our commercial department, but the local community as well. They’ve come to the aid of a local football club during their time of need, as well as working with our Community Trust in recent weeks, purchasing 360 tickets from the club and then distributing them free of charge to children at local schools.

“That really is a terrific gesture and one I’m sure every Hull Kingston Rovers supporter will appreciate as we look to showcase the sport to the younger generations. It will be fantastic to see those children and their families enjoy what will hopefully be an entertaining 80 minutes of rugby league on Sunday.”

360 Accountants Managing Director Andy Steele said: “We were only too pleased to increase our involvement with the club this year. Aligning ourselves with the Hull KR brand which is recognised globally is a no brainer and when the commercial department suggested helping 360 local families attend the game we thought it was a terrific idea. We’re looking forward to what should be both a great game and tremendous exposure for our business.”