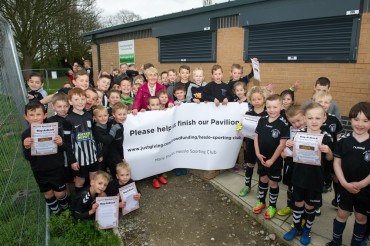 Hessle Sporting Club is appealing to local businesses to become Sporting Angels in a bid to raise £20,000 to finish a new community hub building after being left in the lurch by their builder.

The building should have been finished last May but nearly a year on and another 5 missed deadlines they have had to terminate the builder’s contract.

Julie Fisk, Treasurer of Hessle Sporting Club, which has been going for 41 years, said:

“We had already paid the full amount to the builder but the project is still unfinished.  Originally we had intended it as a club house for Hessle Sporting but so many community groups have been asking to use the building once it’s finished we couldn’t be more delighted.  We just need to raise this last amount of money to complete what will be a wonderful asset for Hessle.

“We raised the initial £253,000 quoted for the building via fundraising, grants and a small loan.  However, with all the delays we are way over budget.  We are all volunteers and we have explored all possible funding routes and drained them.  It’s been such a stressful time but we are nearly there and we are desperate for help.”

Businesses and individuals can donate in a number of ways via a Just Giving crowdfunding page.  It’s hoped some will even become Sporting Angels, like 360 Chartered Accountants who have already donated £1000.

“360 are proud supporters of Hessle Sporting.  The new hub is a wonderful facility that simply must get finished for the benefit of the local community and we urge other business to join us as Angels.”

Meanwhile, Ian Little from subfloor preparation specialists Uzin Ltd, who are donating products worth over £1000 to help complete the flooring said:

“We just wanted to help the kids and to give back to the local community.  We want everyone to be able to get in there as soon as possible, so we’re using our expertise to do that.  It would be great if other businesses can do the same.“

To become an Angel, businesses must donate £1000.   In return they will have a special plaque dedicated to them on the wall of the function room, which will be seen by at least 10,000 people every year, as well as their own web page plus social media content.

If a business donates £2000 they become an Archangel, which will allow them to have a room named after them in addition to all the benefits of being an Angel.

“We really hope businesses will support us and we thank them all in advance.  Any amount of money is appreciated.  In fact, anyone who donates will be listed on a “supporters” page on our website.  You can buy a brick for £25, specially engraved with your name and placed permanently inside the hub’s main function room.  For £50 businesses can add their logo to their brick and for £100 they can also have their own business page on the club website, alongside a rolling film to be displayed on the clubhouse television.

“We are creating a community hub here.  It is for everyone’s use.  It will be the new base for a youth club, chess club, fitness classes, first aid classes, bingo and many other groups who will finally have a place in the heart of this community.”

For more information and to donate please visit https://www.justgiving.com/crowdfunding/hessle-sporting-club