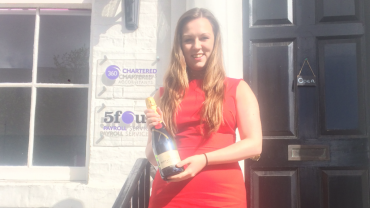 The 360 Chartered Accountants team is celebrating after its very first apprentice passed her final ACCA exams to become a fully qualified accountant!

Sophie Holmes joined 360 in 2011 and came second in the national finals of the ICAEW Apprentice Business Challenge Competition in 2013.  Last year, after having already been promoted internally for her exceptional work, she was named as the firm’s Charities Specialist

“We are so proud of Sophie.  She has worked incredibly hard over the years and we couldn’t be happier for her.  The 360 Apprentice Programme has proven to be extremely successful.  We really are passionate about investing and developing the skills of everyone we train.  Of course, now that Sophie is fully qualified and going on to bigger and better things within 360, we are looking to bring in a new apprentice to replace her.”

The new apprentice will start working in the 360 Outsourcing Department and will be involved in bookkeeping, producing management accounts, VAT returns and other management information using mainly online accounting software.

“We are looking for someone who has completed their ‘A’ Levels and can start in September.  Whilst they will begin their apprenticeship in outsourcing, there will be plenty of opportunity for progression into other departments.  As well as studying AAT and ACCA at Kaplan, our other 6 apprentices will be on hand to mentor and support them throughout their studies.”

“I was so pleased when I received my results and learnt I had passed my final exam. It has been a long journey, with a lot of hard work along the way, but it is definitely worth it.”

The deadline for applications is Friday 28th April 2017.  CVs should be emailed to careers@360accountants.co.uk.