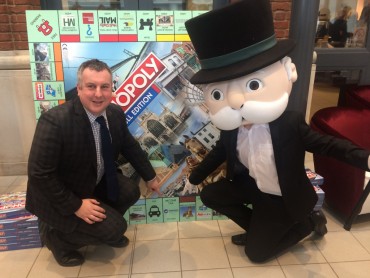 360 Chartered Accountants is thrilled to have a spot on the Hull edition of Monopoly which has been officially launched today (7th April 2017).

As well as having their name and logo on the Tax space just after you pass ‘Go’ they also appear on one of the Community Chest cards, allowing you to collect £200 to fund your new business venture! And if that’s not all, the firm’s city centre headquarters, a beautiful Grade II listed Georgian building on Albion Street, which they brought back to its former glory, will be featured on both the game’s board and the box lid.

Andy Steele, Director of 360, based in Hull and East Yorkshire, said:

“We couldn’t be more delighted.  It’s a great opportunity to become part of this iconic game as well as to be involved in the UK City of Culture.  We are particularly pleased because by featuring on the board and box we are also celebrating the history of our fantastic Georgian building which is 225 years old this year.  We are very proud of how it looks after our refurbishment.  I, myself, have the traditional Monopoly at home as well as the Hull City AFC Monopoly.  I love playing it and can’t wait for everyone to see the 360 headquarters and logo in this new version.”

360, the only accountancy firm to be featured, was approached by London-based games company Winning Moves – but they were sworn to secrecy.  In fact, most of their staff didn’t even know until news broke today.

The new Hull Monopoly hit the shelves first thing this morning – and it’s sure to be a resounding success.  Andy Steele added:

“As well as local people, we want tourists to buy it and remember what a great time they had in Hull so that they come back to visit us again.”