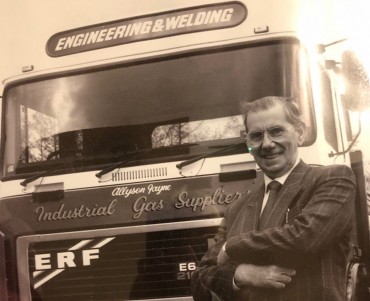 The founder of Energas and Eng-Weld Alf Robinson has died at the age of 96.

Mr Robinson founded Eng-Weld in 1960 selling tools from a corner shop on Hessle Road and from a second hand van. He exemplified true entrepreneurial spirit and the company became the second largest welding distributor in the UK and commenced selling industrial gases in 1971. His son, Michael Robinson, became Managing Director in 1980 continuing the companies’ success while Alf stayed on as Chairman. Energas was formed in 1985 and by 2012 had become the largest independent industrial gases company in the UK, with 6 production sites and 12 distribution centres throughout the North of England and the Midlands and employing hundreds of staff.

Despite the companies being sold in 2012 to French-owned Air Liquide, their headquarters have remained in his home city of Hull.

“It is with great regret that we announce the death of our wonderful father and grandfather. Alf was incredibly proud of his company and the employees who worked there and he never forgot his humble beginnings. As a former long-distance lorry driver he thought nothing of jumping into a lorry to do a delivery, even when he was the Chairman of an incredibly successful company. We will miss him deeply.”

Mr Robinson was also well known for his love of the East Coast Run for Vintage and Classic vehicles which he also sponsored. It was his vintage lorry that started the run from Hull’s East Park and he would drive it, with hundreds of historic cars and lorries following. This year the run celebrates its 50th anniversary.

Mr Robinson will be laid to rest on Wednesday 18th April at 10.30am at Willerby Crematorium.