Only 50% of Businesses Comply with Modern Slavery Legislation 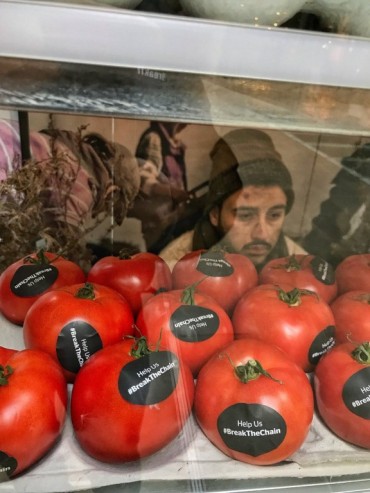 On the same day as Human Rights Day, the University of Hull’s Wilberforce Institute has launched a new initiative to highlight modern slavery and how close we are to it, without even realising it.

Today, students are in London to take it in turns to be symbolically ‘confined’ within a ‘human vending machine,’ illustrating the plight of an estimated 25 million people trapped in forced labour across the world, including right here in the UK.

The ‘human vending machine’ demonstrates the significant risk of exploitative practices that lay hidden within the supply chains of some of our most commonplace household goods – even the food on our tables.  Meanwhile, experts say the public could – and should – use their consumer power to put pressure on companies to ensure their supply chains are free of forced labour.

New research, gathered from a Hull University/YouGov poll, has also been released today.  It reveals confusion around the issue.

They are encouraging people to share #BreakTheChain across all forms of social media to help influence businesses to take action against modern slavery practices (such as forced labour and human trafficking) in their supply chains.

“As consumers we are often at a loss as to what we can do to help – but we can make a difference by being aware of issues and asking companies to report on the Modern Slavery Act. Businesses have a legal – and moral – responsibility to eradicate slavery from within their operations and their supply chains.

“Due to the landmark legislation passed in the UK in 2015 – the Modern Slavery Act – any business in the country with an annual turnover of £36 million or above is required to provide a statement outlining the steps it has taken to ensure slavery does not exist in any part of its operations. Under this act, forced and compulsory labour is a form of modern slavery.

“Yet only around 50% of businesses comply with the law. We are asking people to join us in influencing businesses to do more to identify and eliminate slavery from their supply chains by and sharing our #BreakTheChain.”

“Labour intensive industries, such as farming and food manufacturing, where temporary and irregular work are common, are high-risk sectors for forced labour.

“Victims are often forced to live and work in dangerous and unhygienic conditions for little pay or with their wages controlled by the trafficker.

“This type of crime exists throughout the country, with victims often hidden in plain sight.  This initiative by the Wilberforce Institute brings the issue into the public’s consciousness in a creative and impactful way.

“The public plays a key role in helping us to tackle modern slavery. If you suspect that you, or someone you know may be a victim of labour exploitation, you can get support and make a report confidentially to the Modern Slavery Helpline on 0800 121 700 or the Gangmasters and Labour Abuse Authority on 0800 432 0804.”