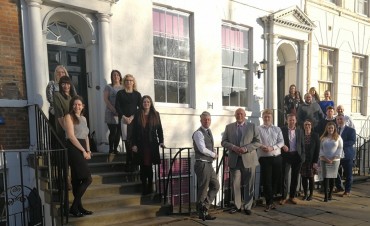 Hull and East Yorkshire-based 360 Chartered Accountants is delighted to announce that its newly extended headquarters is now open for business after extensive renovations saw a Grade II listed building brought back to its former glory.

Four years ago the firm bought and renovated the beautiful Georgian townhouse at number 19 Albion Street as its new headquarters. They have now bought and fully restored number 18. The transformation was made possible with the help of grant funding from the Humber Local Enterprise Partnership (LEP).

“With an ever-increasing client base and our increased work force, the need to expand was paramount. We were thrilled when the premises next door went up for sale at just the right moment. Over the last few months we have knocked through to form a new and improved space. While the outside has been sensitively restored, inside we have continued the modern, contemporary style throughout which is, of course, fitted out with the latest technology, including KC Lightstream. In addition, we now have more meeting rooms, an area for client seminars and staff training, more office space for the team and more car parking.

“It was always my vision to have a 21st century firm of accountants based in the heart of the city centre that embraced modern technologies and working practices. I’m delighted to say it’s all going according to the masterplan. We started with just 3 members of staff. Now we have over 30, with plans to recruit more in the coming months. Our newly expanded offices couldn’t have come at a better time for us and our clients.”

The renovation work was completed by local firm Flex, while the IT installation was carried out by PCSC, based in Scunthorpe. Andy Steele continued:

“As proud ambassadors of Hull and the Humber we like to keep money in the local economy and we look forward to doing this for many years to come. Flex and PCSC have done a fantastic job and we’d like to thank them for their hard work.”