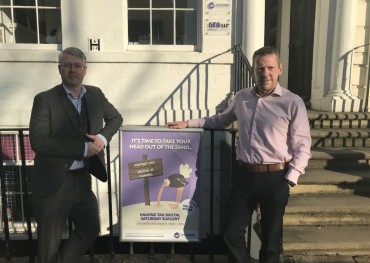 With just over a month to go before the introduction of Making Tax Digital (MTD), 360 Chartered Accountants is urging businesses to take this change in legislation seriously – or face the consequences.

It comes after a survey carried out by HMRC revealed that while 81% of affected businesses were aware of MTD, 55% said they weren’t planning to sign up to it in time. One in five firms said they didn’t have a clear idea of when they planned to sign up and 4% said they needed more information before making their decision.

The results tally with a poll undertaken by 360 on social media in the last week in which over a fifth who responded either weren’t prepared for MTD or hadn’t even heard of it.

“We are inviting anyone who isn’t ready for MTD to our Saturday morning surgery on March 2nd, which is our last open event before the new legislation comes into force. While we are happy that all of our clients are already MTD compliant, we would love to see any businesses still keeping manual records and spreadsheets because they need to start doing things differently. People seem to think that if they ignore it, it will simply go away. Well, it won’t – and there’s not much time left to get their affairs in order.”

It’s the biggest change to the tax system since self-assessment was introduced in 1998 and the vast majority of VAT registered businesseswith a turnover above £85,000 will have to keep digital records and submit VAT returns using MTD compliant software.

Only four months ago figures from the Institute of Chartered Accountants (ICAEW) suggested that half of businesses in the UK weren’t ready, while a House of Lords report found that around a third of those affected were still not aware they had to file digitally from April.

“We pride ourselves on being accountants for the digital age but we are also aware of more traditional firms who are not as prepared and who don’t necessarily have the technical knowledge to pass on to their clients. We are more than happy to help them. We also have downloadable resources on our website. We might all be very Brexit-focused at the moment but businesses must focus on MTD too.”

The 360 “Saturday Morning Surgery” will take place on Saturday 2nd March 2019 at 360’s headquarters on Albion Street in Hull.  Experts will be on hand to explain how MTD works, recommend software, help in the transition and discuss any other queries you may have.

There’s no need to make an appointment but please register your attendance by emailing events@360accountants.co.uk.  Anyone wanting to pop in for a chat and a croissant can simply drop by between 9am and 12 noon.