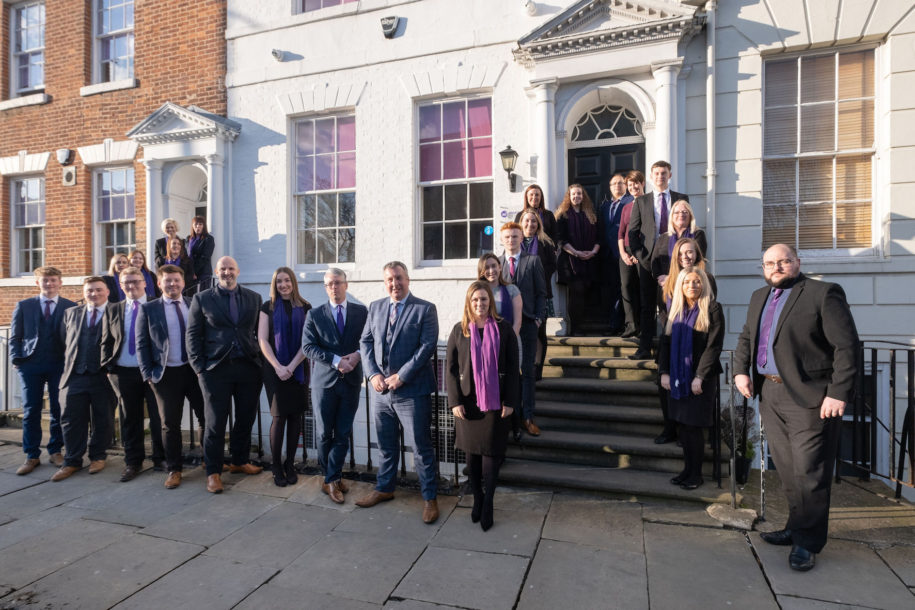 Posted by Fiona Dwyer on 4th March 2020 | Featured | No Comments

Set up by well-known local accountant Andy Steele, his ambition was to create a fresh thinking, forward thinking firm, that used technology to speed up the delivery of information to clients, as well as protecting the environment by moving towards as paperless an organisation as possible.

“I never wanted to open just another accountancy firm, like all the others.  It was always my vision to have a 21st century firm of accountants based in the heart of the city centre that embraced modern technologies and working practices.

“Unlike most accountants, we’ve also been through the process of being a start-up, growing our business, buying premises and systemising which means we can add real value to our clients by sharing our experiences and processes with them.

“I’m delighted to say it’s all going according to the masterplan.  We started with just 3 members of staff in a small office in Melton.  Now we have over 30, with plans to recruit more in the coming months.  Our early success meant that in 2015 we were able to buy and renovate a beautiful Grade II listed building on Albion Street, bringing it back to its former glory and transforming it into a modern, contemporary headquarters.  Then, 4 years later, we did exactly the same to the property next door because we needed even more room.”

Paul Robinson has been there from the start.  He said:

“I am a late bloomer to the world of accountancy.  I’d just become AAT qualified at the time.  It was a change in career for me after leaving the leisure industry.  It was an amazing opportunity to join a brand new business.  I gained so much experience in those early years, being exposed to so many different parts of the business, not only dealing with and building relationships with new and existing clients, but also maintaining our own business and helping us grow. The experience has not only helped me progress as an accountant.  I’ve also been able to help new start-ups businesses as we have been through the process ourselves.  Andy gave us responsibility to develop our own way of working and tried to embed a 360 mentality that we have passed on to the new members of the team over the 10 years.  I’m very proud of where we have come….here’s to the next 10 years.”

360 has largely been built on word-of-mouth referrals from existing clients and professional contacts in the city.  They also offer free advice and information sessions at their regular Saturday Surgeries.

Two years ago, 360 further expanded when it merged with Walsh and Co, a Withernsea-based accountants.  Just last month, 360 announced a mergerwith two of its sister companies 5Four Payroll and 360 Mentor – as part of a streamlining process after extensive consultation with clients.  Meanwhile, 360 Wealth Management remains a separate limited company within the 360 group.

“I’ve been using 360 since they set up 10 years ago. We outsource pretty much all of our finance function to them (bookkeeping, payroll, pensions etc) which enables me and my team to focus on running the business and doing what we enjoy and are good at.  The management information 360 produces is timely, reliable and adds real value to my organisation and the regular meetings I have with Andy Steele allow me to look at strategy and gives me a platform to bounce ideas off someone that’s been there and bought the t-shirt.”

360 uses online software packages, including Xero, so that clients can access real-time financial information whenever they want, helping them to make better strategic decisions and predict future cash flows.  Meanwhile the 360 app, which regularly tops the iTunes download chart for accountancy applications, has been downloaded more than 9,000 times onto Apple devices and several thousand times by Android users.

“I think the secret to our success is that we are constantly in contact with our clients and adapt our offering to suit their needs.  That’s why we’ve been able to grow so rapidly over the last decade.